Bullion Exchanges is a trusted Precious Metals Retailer located in the heart of New York City's Diamond District. We offer a wide selection of gold , silver, platinum and palladium bullion appealing to 1st time buyers and the seasoned collectors. 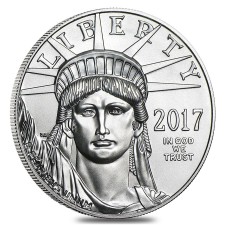 Dallas, TX, January 23, 2017 (Newswire.com) - The exact number of bullion coins allocated has not yet been disclosed, but it’s expected to be about 20,000 pieces, as the mint will accept from each authorized buyer an order size based on the previous 2016 purchase. Also, there is no certainty whether the mint will produce another batch of coins after the stock runs out. Its official letter just states that it “may offer additional quantities for release later in 2017”.

Platinum American Eagles are the official platinum bullion coins of the United States and a big hit among collectors and investors all around the world. The US Mint introduced the platinum series in 1997, and although it didn’t reach the same production base as the gold and silver series, the coins immediately became sought-after collectibles. This year, the mint commemorates 20 years since its release, making the 2017 pieces highly desired.

Since their first issue, the coins have been produced in various sizes and finishes, being struck at the West Point and Philadelphia US Mint facilities. The 1 troy ounce Platinum American Eagle is made from .9995 fine platinum and is US legal tender with a $100 face value assured by the Government of the United States. 1/10 oz., ¼ oz. and ½ oz. fractional Platinum Eagles were offered for the last time in 2014, having the same fineness.

Platinum Eagle’s obverse side was designed by the former US Mint's Chief Sculptor-Engraver, John Mercanti, the legendary creator of various US coin designs, including the Silver American Eagle. This image has been used for bullion and proof Eagles since the series’ debut and it represents the modern concept of the “Portrait of Liberty” – the head of the Statue of Liberty looking confidently into the future, framed by the words “E Pluribus Unum”, “In God We Trust”, “Liberty”, and “2017”.

The reverse design of the Platinum Eagle bullion coin is the same for each issue, unlike the proof edition that changes every year. It was created by Thomas D. Rodgers, Sr., also former sculptor-engraved of the US Mint which now collaborates with it as an independent artist. It represents the magnificent bald eagle soaring against the sun’s rays, having its wings outstretched and being encircled by the inscriptions “$100”, “United States of America”, and the coin’s purity and weight.

The previous two 1 oz. Platinum Eagle bullion coins have been issued on a limited basis. US Mint produced 14,000 coins in 2014, and 20,000 coins in 2016 and all of them sold out quickly. No coins were issued in 2015 because the mint was searching for platinum planchet suppliers. Also, 2014 editions were the first one released by the mint after suspending their production and sales in 2008. Since the mint doesn’t offer these coins directly to the public but solely through a network of approved purchasers, it’s expected that their first tranche will sell out quickly.

As one of the largest and most reliable precious metal retailers and dealers in Manhattan’s Diamond District Area, Bullion Exchanges offers you a wide variety of high-quality bullion products, produced from the most popular precious metals, including but not limited to gold, silver, platinum, and palladium as well as the newly emerging rhodium.

Get notified about new releases.

Sign up for email updates from Bullion Exchange LLC.